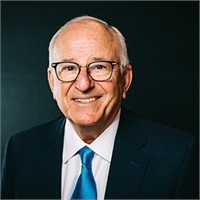 Bob is chairman of Alliance Advisory Group, Inc.  He has been a general agent for Guardian since 1979.

He is a graduate of the University at Buffalo and received his master’s in financial services from the American College in 1994.

In the industry, he has taught Chartered Life Underwriter (CLU®) and served as an AMTC moderator. He is the past president of the Buffalo Chapter of the American Society of Insurance Professionals, Western New York chapter of the General Agents and Managers Association (GAMA).

Bob has spoken throughout the country to industry and non-industry groups, and was the main platform speaker for LAMP in New Orleans in 2004 and 2010 in Las Vegas.  He has spoken internationally in 11 countries on leadership and coaching.

Within Guardian, he has served on the Field Advisory Board and as chairman in 1997 and 1998.  He was active in the formation of the Guardian Leadership Institute.

Bob is the creator of The Lead One coaching program.  Lead One is designed for mid-level leaders, small business owners in developing critical leadership skills for developing their leaders.

He is the co- author of the book “The Power of Coaching” and is the author of his newest book, soon to be released “Lessons from the Porch”.

He is past Chairman of the Board of Trustees for the Buffalo Niagara American Heart Association, past Trustee of Roswell Park Cancer Institute and past Trustee of Forest Lawn Heritage Foundation.

He is married to his high school sweetheart. They have two children and six grandchildren.

Explore a Career as a BDA & Financial Advisor Webinar